It was announced that Ted Nugent is headlining my local county fair this summer. He’s an aging 70s rock star who spouts hatred, misogyny, prejudice and alternative facts. I wrote a letter to the fair committee and said that after a decade of enjoying the event I won’t be bringing my kids this year. I’m disgusted that my community is hosting this a-hole. I’m pissed off. I’m…playing right into Ted Nugent’s hands.

Ted Nugent issued a statement in response to the controversy that said, “Only liars and America hating scumbags have a problem with me.” WTF? This pissed me off more. Then I get pissed about letting Ted Nugent piss me off. Then I think about how our culture is addicted to outrage, and how the media feeds our outrage, and I get even more pissed off at the whole circle of outrage…F-you, Ted Nugent, for setting me off.

The whole thing makes me feel like I should do more yoga and meditation. Then I feel guilty for not doing enough yoga and meditation. It’s exhausting. And I’m tired of feeling exhausted all the time. And this pisses me off all over again. Is this ironic? Or merely Alanis Morissette-ironic?

But then there’s the flip side. Let me switch gears for a moment. I’m also hopeful about certain things. Like my kids. They calm me and ground me. They are my hope and joy. I’m excited to watch them navigate toward their goals despite the inevitable obstacles and frustrations they will face. I’m excited when my son talks about politics – he’s twelve and he’s into politics! He wants to make the world a better place. (He also wants to play Fortnite all the time, but oh well.)

The smile on my daughter’s face is brilliant. It fills my heart. I love watching her think. It’s like magic. The greatest thing about being a mom is the love. There’s nothing like it. The worst part is the worry. It never ends.

Which brings me to my fears. Loss is my biggest anguish. Although loss is a normal part of life — we lose our keys, hair, money, friends, jobs, our way — some of us lose our children and that’s irreparable. The loss of my oldest son keeps me up at night and it’s why I live in two worlds at once. But I would still do everything the same even if I knew having him would end with loss — I would still suffer the enormous heartbreak if I could be his mom again. And I would move time and space to make it happen. 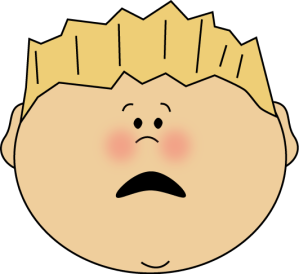 Is it because she’s tired and always feels a bit perturbed? Or maybe that her hands are too full to flip the bird?

Why Mommy swears a lot is a mystery, you see. She seems to swear at everything, but she never swears at me.

I’m tired. It’s a tiredness born from from stress.

A week ago I had reconstruction surgery on my breasts after having a mastectomy last March to rid me of breast cancer. Everything went well, there were no surprises, and I consider myself lucky. I had my follow up appointment with the plastic surgeon, who seemed pleased with his work. I’m still sore, swollen and bruised, so it’s hard for me to agree at this point, but we’ll see.

I brought my little girl along for the two hour trek into the city. She was perfect at the plastic surgeon’s office, wonderful at The Museum of Contemporary Art, adorable at the playground. But…The Disney Store was one outing too much and her meltdown ensued right there on Michigan Avenue. I pleaded, “I can’t carry you because of my boo – boo.”

And that’s when you appeared.

You were older, maybe 70, and very nicely dressed. You told my daughter you loved her sparkly Hello Kitty boots and pink baret. You said they were nicer than any shoes you had. My daughter hid behind me and didn’t talk. You smiled at us. Then your expression turned serious and you said. “You’re doing a good job.”

And then you were gone.

You have no idea what that meant to me at that moment. Your affirmation made my day, and this was no normal day — It was a day I cleared a major medical hurdle. But at that moment you spoke directly to the heart of who I am. You somehow knew what I needed to hear.

And I thank you.

Sometimes I can’t remember my dreams. I can go for weeks thinking I don’t dream at all. Then there are times when I have a flurry of dreams and remember multiple ones from the same night.

Lately, it’s been one of those times.

I’m having a bunch of anxiety dreams that are all thematically connected. As you will see, my subconscious is, apparently, cousins with Captain Obvious. Or she knows how dumb I am and decided to smack me in the face with symbolism.

Of course, these being dreams, they plod along in that ridiculous and bizarre way dreams do that make absolutely no sense. Until they do. And then they don’t again.

Basically, the gist is I don’t know where I’m going, I’m unprepared and overwhelmed. (Duh, who isn’t?) If anyone’s a dream analyst or has some insight, here you go…

So these are just a recent few. I’ve always had stress dreams (being chased, running on all fours, etc.) But sometimes I also have fantastic flying dreams that I love.

I’d love to hear what you dream…